For us, Norse is a tool to accelerate our own work within spiking neural networks (SNN). This page serves to describe the fundamental ideas behind the Python code in Norse and provide you with specific tools to become productive with SNN.

We will start by explaining some basic terminology, describe a suggestion to how Norse can be approached, and finally provide examples on how we have solved specific problems with Norse.

You can execute the code below by hitting above and pressing Live Code.

Fig. 3.1 Illustration of discrete events, or spikes, from 10 neurons (y-axis) over 40 timesteps (x-axis) with events shown in white.¶

Neurons are famous for their efficacy because they only react to sparse (rare) events called spikes or action potentials. In a spiking network less than \(2\%\) of the neurons are active at once. In Norse, therefore, we mainly operate on binary tensors of 0’s (no events) and 1’s (spike!). Fig. 3.1 illustrates such a random sampled data with exactly \(2\%\) activation. 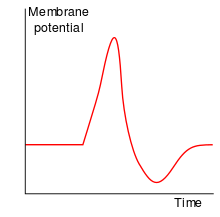 Fig. 3.2 Shape of a typical action potential. The membrane potential remains near a baseline level until at some point in time, it abruptly spikes upward and then rapidly falls.¶

Norse solves two of the hardest parts about running neuron simulations: neural equations and temporal dynamics. We provide a long list of neuron model implementations, as listed in our documentation that is free to plug’n’play.

For each model, we distinguish between time and recurrence as follows (using the Long short-term memory neuron model as an example):

Norse is meant to be used as a library. Specifically, that means taking parts of it and remixing to fit the needs of a specific task. We have tried to provide useful, documented, and correct features from the spiking neural network domain, such that they become simple to work with.

The two main differences from artificial neural networks is 1) the state variables containing the neuron parameters and 2) the temporal dimension (see Introduction to spiking systems). Apart from that, Norse works like you would expect any PyTorch module to work.

When working with Norse we recommend that you consider two things

The choice of neuron model depends on the task. The leaky integrate-and-fire neuron model is one of the most common. Many more neuron models exist and can be found in our documentation: https://norse.github.io/norse/generated/norse.torch.html#neuron-models

Optimisation is mainly done using PyTorch’s optimizers, as seen in the MNIST task. We have implemented SuperSpike and many other surrogate gradient methods that lets you seamlessly integrate with Norse.

For more details, see our documentation on activation functions.

As you have seen, Norse can be applied immediately for both fundamental research and deep learning problems. Below, we will show how two such problems have been solved.

A classical example of deep learning can be seen in the MNIST task where we convert the MNIST dataset into sparse discrete events and solve the task with >90% accuracy using convolutions.

An example of this can be seen in the memory task, where adaptive long short-term spiking neural networks are added to solve temporal memory problems.